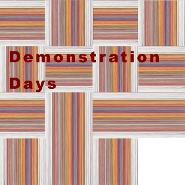 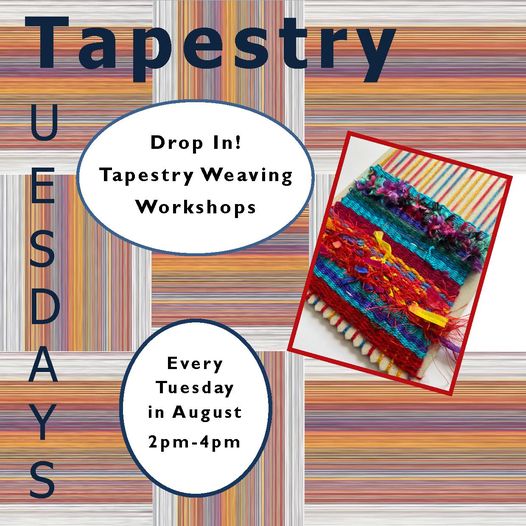 Demonstrations and workshops at the Museum

Join us this summer for an exciting series of Wednesday workshops - all held in the historic setting of our Museum.  Our guest tutors are craftspeople from the local area working with wool in a variety of traditional ways. Tickets must be booked in advance.  More workshops are being added all the time, so remember to keep checking here and our social media pages for booking details and costs.

All the details are now on our - Summer Activities page

Unfortunately, due to circumstances beyond our control, the Wednesday workshop advertised for August 3, has had to be cancelled.  Apologies to those who were planning to attend.

Fifty years ago, Newtown was changing rapidly and two local photographers, Derek R. Parker of Llanidloes and Ron Haines of Newtown, set out to document the changes, as well as to record 'Old Newtown'. Our new exhibition looks at a selection of their work and compares the locations they captured with how they look today, with photographs taken by our curator, John. We are also hoping to run an oral project alongside the exhibition and we will be encouraging local visitors to share their memories of  a different time. 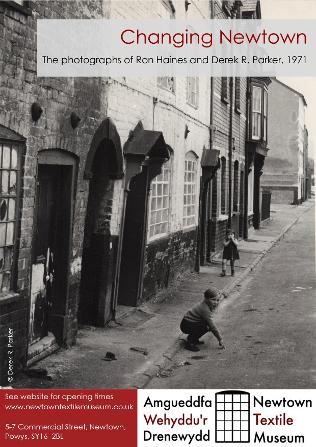 Are you a bookworm?

A recent visitor told us of a novel that referred to the flannel mills in Newtown: Not one of us by Alis Hawkins. We have started to put together a list of books which we are told feature the weaving industry in Newtown or just the life of the town which we will put on display for visitors. Check out this list for the suggestions so far:

We need help on two fronts? Have you heard or read any more books featuring Newtown and or the weaving industry in Wales.  Anddo you have any copies which you could donate or lend to the Museum for this project. If you can help please contact Christine Davies on committee02@newtowntextilemuseum.co.uk  She would love to hear from you.

One of our volunteers has sourced some great things, woolly or sheep related, that we now sell from a small shop in the reception area.  We also have two very popular mugs - one of the Museum building, and the other is of the painting of the train arriving in Newtown in the 1870s. Great reminders of your visit.

We had a stall at the Powys Pioneers Heritage Festival held recently. Taking place at the iconic Pryce Jones Royal Welsh Warehouse in Newtown, and co-hosted by the Heritage Hub 4 Mid Wales and Focus Newtown Hub, the festival celebrated the pioneers of Newtown’s past including Laura Ashley, Pryce Jones, David Davies and Robert Owen. We took along some artefacts from our own collection that help tell the history about the opening of the railways, as well as Pryce Jones and Laura Ashley. 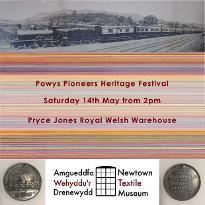 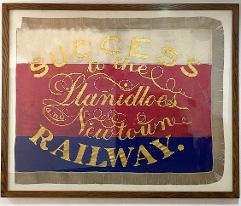 As part of the preparation for the 2022 season,  we held a volunteering open day on the 16th April. You probably know that the Newtown Textile Museum is an independent museum, managed and run entirely by volunteers. We are enthusiastic and dedicated but we need to grow our team so we need your help. If you missed it, but would like to be involved, we are still very interested in hearing from you, so do make contact.  If you have some time to give, maybe you could help in....

Last year the Museum played host to a film crew from Celebrity Antiques Road Trip. It was a long day for the TV crew and for our Curator, John, and student Emily who were assisting, but the results are still available for you to see.

The program went to air on BBC Two on Thursday 25 November 2021.  It is episode 10 of Series 10. Stand-up comedian Zoe Lyons was joined by radio DJ Noreen Khan in this popular show. If you missed it, you can catch up on iPlayer.

The Great British Sewing Bee segment about the Museum which went to air in May generated a lot of interest among our visitors, and this new TV program was the same. 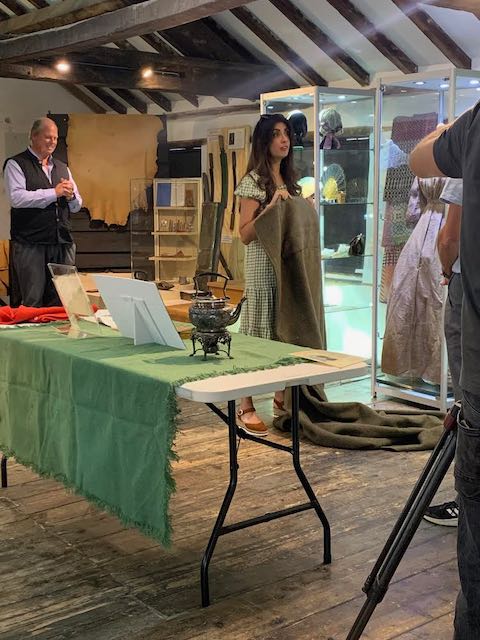 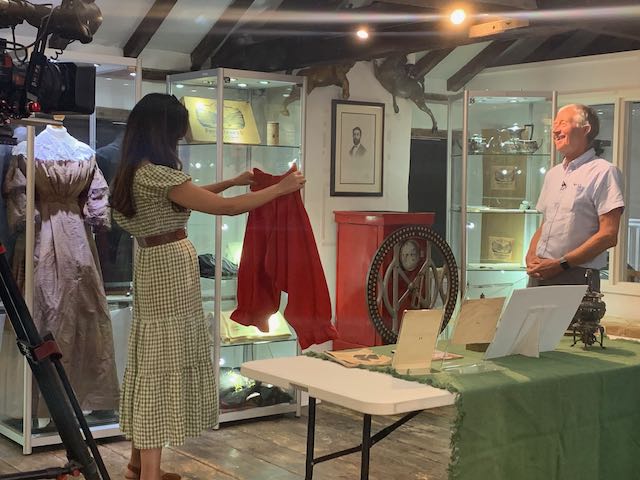 We like to be part of Welsh Museum's Festival week, and 2021 was no exception. On 29 and 30 October the Museum opened for a special two-day event, which was held in partnership with Oriel Davies. The focus was on  the traditional crafts of weaving and spinning

The Museum had invited Francesca back to the Museum to work on our loom for the two days, and Jill came along to demonstrate and talk about spinning on the Friday.  We were delighted that a large number of visitors, including lots of children, came to see us over the two days, and many of  them left with very positive comments about their visit.

The Oriel Davies had two exhibitions running - Blanket Coverage, and Steve Attwood Wright's work, showing aspects of weaving which ran in the gallery until the end of the year. They celebrated half-term with a weave-weekend where they had demonstrators, talks and some of the weavers were present. It was great to collaborate with the gallery and to keep the traditions of spinning and weaving alive. 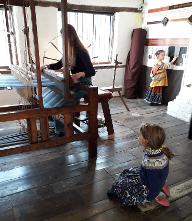 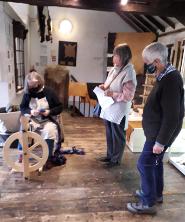 We are so lucky

Emily, shown here working on a dress in our collection, was a great addition to the Museum for the summer of 2021, and she will be joining us again in 2022. A student at Nottingham Trent University she is studying Costume Making and Design, and she came to gain some experience of working in a Museum. Wonderful for us, and hopefully useful for her too.

This  wedding dress  from 1881 that Emily is checking has a matching skirt and a cape, and as you can see, was made in Newtown. We know  that Henry Morgan had a drapery store in the High Street and it was worn by Ann Rogers, but there are always lots of questions in Museums and we would love to know more. It would be great if you could share any information with us.

The dress is not on display at the Museum at the moment as it needs some conservation work first, and we must find the funds to pay for it. 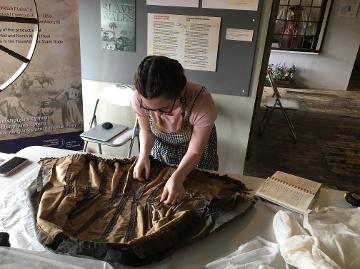 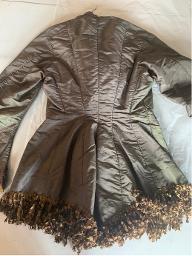 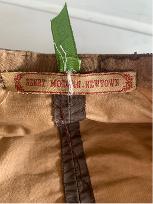 We have discovered some things about Ann and Thomas, the bride and groom.

Check out these links.

Another development.  We are now featured on Twinkl's Museum Campaign - an education website of teacher-created planning and assessment materials. Twinkl also have a wide variety of museum-related resources on their site.

Check out their blog

Promoting Mid-Wales - it has a lot to offer

The Textile Museum is keen to work with other organisations in the Newtown area to encourage visitors to linger longer. We are already working with the Newtown Town Council; the Oriel Davies ; the Robert Owen Museum; and WH Smith who also have a museum in their wonderful old shop on High Street.  We are working closely with Walking Newtown  and Open Newtown too.

There are plenty of other places of interest in nearby towns such as Welshpool and Montgomery as well. More recently we have set up links with the Mid-Wales Arts Centre near Caersws.

We are encourage you to check out Visit Mid-Wales   Don't forget that the Visit Wales website has plenty of information too.

Other websites to check out for valuable tourist information are:  About Britain, and UK Travel & Tourism,    County Sign Post , and also Welsh Border Life

In 2019 we had a visit from a local photographer - Polly Lovegrove.  She took some great photos and a few are displayed below.  Thanks Polly.  ©Polly Lovegrove